When the Raspberry Pi came out a few years ago I picked one up in the hopes to create some home automation projects. As with many of my projects it never really eventuated as life and work took over as they tend to do. Well this year I attended the Adelaide show with my wife and made a visit to the science and tech centre pavilion. Looking over some of the cool projects the high school and primary school kids had put together rekindled my interest in electronics and specially the Pi.
I spent the next few weeks looking through Raspberry Pi projects but couldn’t really find a particular project that involved the pi and something I do every day that could be automated. That was until I came across this project. http://drstrangelove.net/2013/12/raspberry-pi-power-cat-feeder-updates/
We have had two cats for some years now and have tried various manual auto type feeders but found one of our cats in particular would eat its weight in food. Not naming anyone Charlie!!!
Looking over this project, It seemed to solve two of my problems that we sometimes face if we go away over night for an example.
1) Feeding that Cats
2) Ensuring they don’t eat too much.
Enter the DIY Cat Feeder Project.
I first began by thinking of what i would like my feeder to do. I wanted some sort of indicator to let me know it was about to dispense food and also some sort of alert tune. I started by creating a basic prototype on a bread board with two LED’s and a piezo buzzer and wired them up to my GPIO ports on the PI 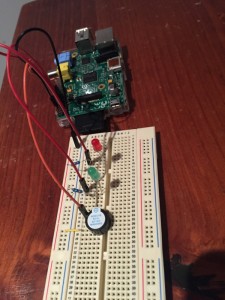